October 18 is Alaska Day, commemorating the day in 1867 that the Russians transferred Alaska to the United States. The transfer took place in Sitka, the capital of Russian America. Each year since the 1950s, Sitka has held a celebration on Alaska Day. Dave and Anke are now based in Sitka, so this year our sister, Beth, and the Juneau Zeigers joined them for the holiday. 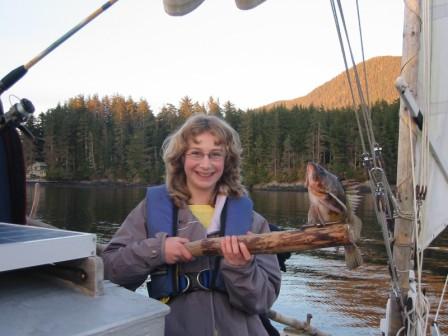 We arrived on Saturday, October 16th, and sailed out to the Kasianas Islands, where we spent the night.
Just casting for fun, Mark caught three cod. Aly pulled in a fourth, for the first fish she's ever caught.
They tasted mighty good! 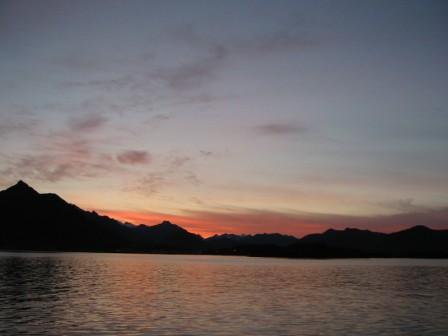 The next morning we set sail under the stars, and sailed back to Sitka as the sun rose . . . . 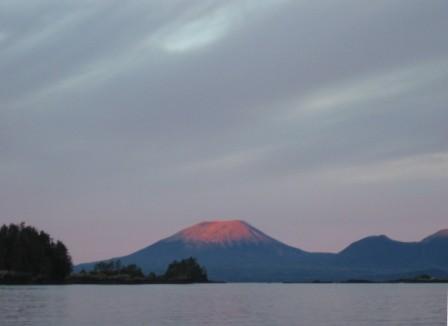 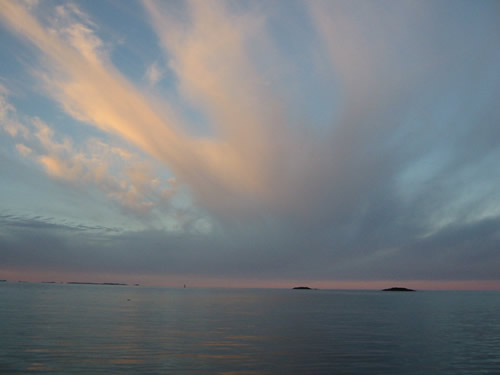 Japan is somewhere over thataway. 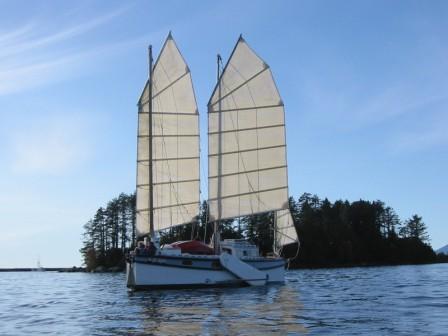 Beth arrived that morning, and we sailed under the O'Connell bridge and headed for Pirate's Cove.
As you can see, the weather was gorgeous! 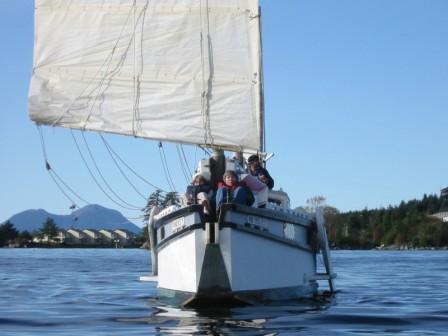 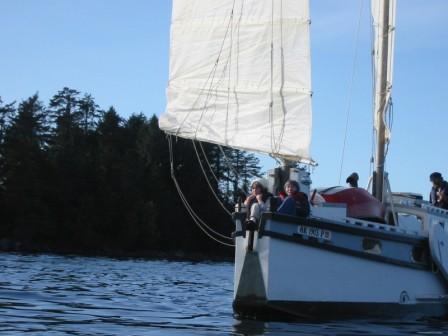 The sail to Pirate's Cove was excellent! We had good swells coming in from the open ocean, gentle, but big enough to splash impressively around the rocks as we passed.

We arrived in Pirate's Cove in the early afternoon. This was a place where Dave and Mark had spent time as kids, and learning to row. Felt like old times. 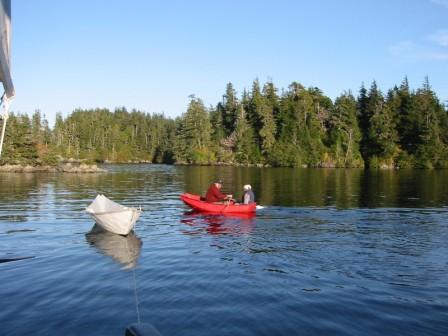 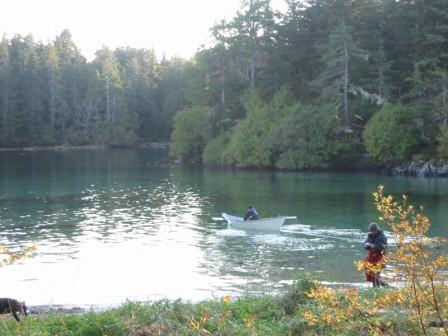 Someone strung a fishing net over a clearing in the woods, creating a bouncy jungle Jim of sorts. Talk about a full body workout! 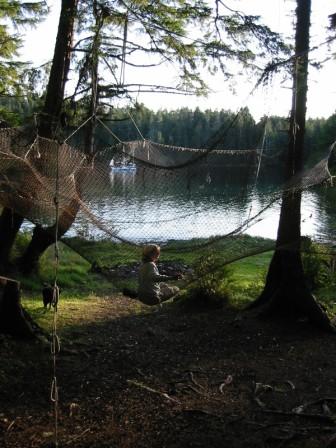 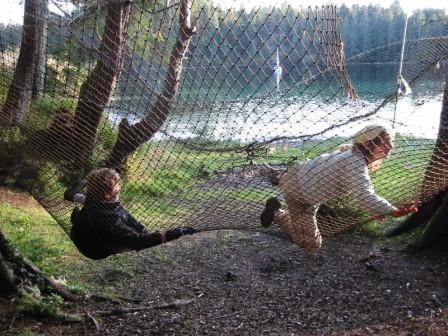 Dave rowed Beth, Aly and Mark around the corner from the cove to a narrow fissure in the rock. The dory barely fit into it, and we had to push ourselves in with our hands against the walls. The fissure takes a right angle, and ends in a tiny gravel beach. When we got in there, some unexpected swells started knocking us around, so we beat a hasty retreat. It was like a rollercoaster—very exciting but pretty safe. 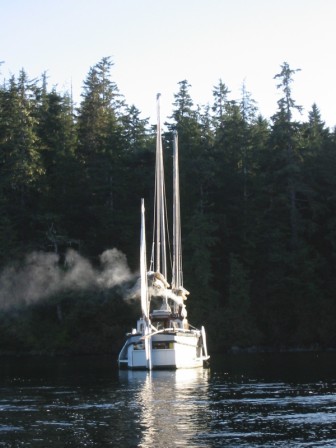 The next morning, Alaska Day, started out gray and windy. We had an exciting ride across to Sitka in 20+ knot winds. We passed right through a pod of humpback whales that dove all around us. 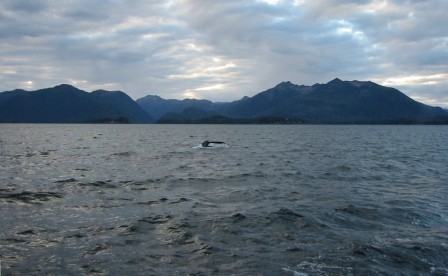 This is our best whale photo, that shows them a lot farther away than some of them were, maybe within 100 feet or less. 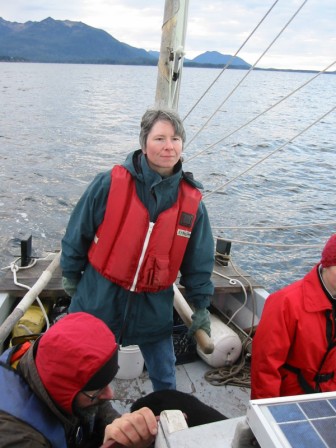 The crew keeps their spirits high.

We actually made it back to town in time for the parade, by which time the wind had died and the sun came out. The story goes that the Russians cursed the day so that it would always rain. This was one of only two or three sunny Alaska Days we could remember.

That evening we had to fly back to Juneau. Beth stayed till Thursday. 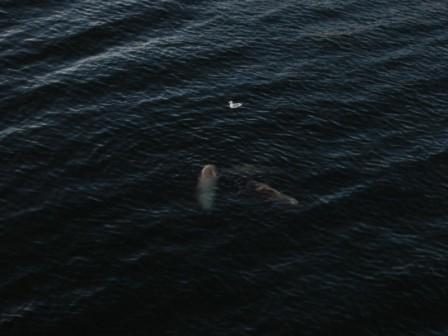 As we crossed O'Connell bridge to the airport, we looked down and saw three sea lions
sleeping in the center of a fairly busy shipping lane.
They hadn't a care in the world! They're about 50 feet below us here. 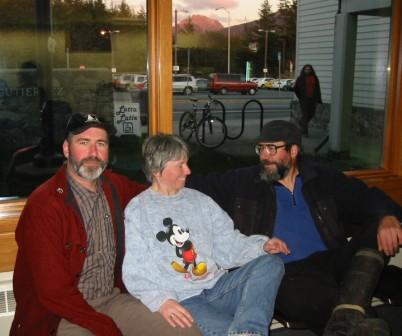 Siblings! Mark, Beth, and Dave.
Sitka's mayor requests that all men grow beards, and all women dress in period costume for Alaska Day.
Mark shaved his beard as soon as he got home. Beth sports traditional 19th century garb (not!).